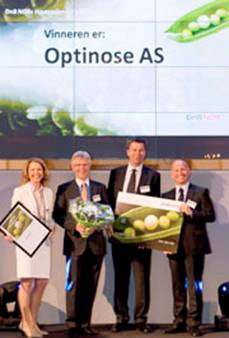 The annual competition arranged by the Norwegian bank DnB, Norway’s largest financial services group, recognizes innovative companies for the best business ideas of the year. Winning ideas build on new knowledge, or use existing knowledge in an innovative way. The panel emphasizes that winning ideas must have the potential for commercial value, societal benefit and the opportunity for economic savings. Additionally, companies need to exhibit a development plan for the realization of the idea.

According to the panel’s statement, “OptiNose has addressed an important challenge with a large international market potential…If the winner succeeds with this, it will mean a major breakthrough in the treatment of disorders of the brain, and Norway will become a benchmark in this area of research and development. It also opens doors for the development of several new treatment options with great commercial potential.”

“It is an honor for OptiNose to receive this important recognition from a leading organization like DnB NOR. We truly believe our bi-directional drug delivery technology holds the promise to more effectively deliver therapies to treat debilitating diseases — from nasal polyps and migraines today, to a variety of CNS disorders in the future,” said Per Djupesland, M.D., Ph.D, Chief Scientific Officer, OptiNose, Inc.

The Company was awarded 200,000 NOK (approximately $36,000 US), and is now eligible for the Norwegian national finals in September, which carries a one million NOK prize. Thirty-three ideas/companies out of a total a total of 716 participants from across Norway entered the seven regional finals.

OptiNose is a drug delivery company with breakthrough bi-directional nasal technology set to transform the static nasal drug delivery market. Founded in 2000, OptiNose’s devices are designed to deliver intranasal drugs to target regions of the nasal cavity, including the sinuses and the olfactory region while preventing lung deposition. The company offers both single and multi-use intranasal delivery devices for liquid and powder formulations. The technology has been successfully tested in a number of clinical trials demonstrating both clinical efficacy and safety. Investors in OptiNose include Avista Capital Partners in New York, WFD Ventures LLC located in New York and Entrepreneurs Fund LP based in Jersey, Channel Islands. For more information please visit www.OptiNose.com.

OptiNose’s bidirectional nasal delivery technology significantly improves delivery to the targeted sites deep into the nose. While exhaling into the device, the soft palate automatically closes off the nasal cavity completely. The breath enters one nostril through a sealing nozzle and triggers the release of drug particles into the airflow. This action causes the narrow nasal passages to expand and carry these particles beyond the nasal valve to targeted sites. After delivering drug particles to the targeted sites, the air flow then exits the nasal cavity through the other nasal passage in the opposite direction.